What is a Pronoun?

Pronouns are a grammatical unit used in place of nouns to reduce unnecessary repetition of nouns in a sentence.

Pronouns are considered as a subpart of nouns. They make the language very easy. Why we need Pronouns?

Pronouns make our language ‘listener friendly’ and comfortable in many situations. Let us look at some of their uses.

Imagine if we had no pronouns. Then each time you wanted to talk about a noun, you must take its name. This would be very absurd. After introducing the noun, using a pronoun in its place makes it more sensible and simpler.

Taking the listener’s name again and again while talking.

Sometimes the noun is unknown to us and we wish to know it. Now, making a sentence without knowing the noun seems to be a difficult job unless ,we use a pronoun.

There are times when the doer and receiver of the action are the same. Or we can say the same noun is the subject and object of the sentence. In this case, without the help of a pronoun, the sentence will sound absurd.

These are just a few examples. There are many more such situations where forming a sentence without a pronoun would be impossible.

There are nine types of pronouns. This classification is made on the bases of the situation and the use of pronouns. The word ‘personal’ means belonging to a particular person. Similarly, the personal pronoun is used in place of a specific noun, a  person, thing, or a group. Personal pronouns help avoid repeating the name of a person or thing that has already been mentioned before.

They vary depending on the gender of the noun, the person of noun, noun number and case of noun. Let us look at the following table to understand this better. Examples of personal pronoun are he, she, it, they, my, me, their, you, etc.

Myself, Himself, Herself, Itself, Yourself, Yourselves, Themselves and Ourselves are reflexive pronouns.

Myself, Himself, Herself, Itself, Yourself, Yourselves, Themselves and Ourselves are also emphatic pronouns.

Emphatic pronouns are used to emphasise the subject. They intensify the subject to show that the subject does an action. Thus, they are also known as Intensive Pronouns.

Relative pronouns relate a noun or pronoun preceding them with the rest of the sentence. They provide some extra information about this noun or pronoun.

Who, whom, which, that, whose, when, where, whoever, whatever, whenever, wherever,  and whichever are relative pronouns.

Interrogative pronouns are used to ask questions about some unknown noun. These are used when we know that an action is being performed, but either the doer or receiver of the action is unknown and we wish to know about it.

In English there are five interrogative pronouns: Who, Whom, Which, What and Whose.

Indefinite pronouns point to some uncertain noun or nouns. They never talk of a noun in particular but still give a quite clear image of the noun being talked about. They are used to refer to a number of nouns but not as a group, rather individually.

Each, Every, Everybody, Everyone, Somebody, Someone, Something, Anybody and Anyone are some of the indefinite pronouns.

These pronouns distribute the effect of a verb on more than one person or thing took one at a time. These pronouns talk about particular members of a group. Each, Either and Neither are the distributive pronouns. 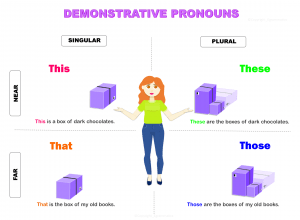 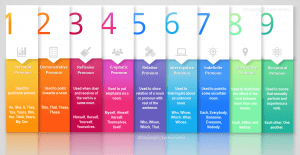