Cases in noun tell about the position and role of a noun in a sentence. It is another important topic in noun. There are Five noun cases in all. Let us discuss them in detail When a noun acts as the subject of a verb in a sentence, it is said to be in the nominative or subjective case. To find noun in nominative case make a question with What? or Who? before the verb.

Question with What is made if noun is a thing. If noun is a person than Who is used to make a question.

(Who is dancing? The answer to this question is Meena. So, noun Meena is subject in this sentence for verb dancing. Meena does the verb of dancing. Thus, it is in the nominative case.)

(Who is talking? The answer to this question is Sachin. So, noun Sachin is subject in this sentence for verb talking. Sachin does the verb of talking. Thus, it is in the nominative case.)

When a noun acts as the object of a verb in a sentence, it is said to be in accusative or objective case. It experiences the verb done by the subject. To find noun in accusative case make a question with What or Whom after the verb and its subject.

A noun that comes after a preposition is also in the accusative case and it is known as the object of preposition.

(She called whom? The answer to this question is Meena. So, noun Meena is an object in this sentence for the verb called. Meena experiences the verb called. Thus, it is in the accusative case.)

(Sachin is driving what? The answer to this question is Car. So, noun Car is an object in this sentence for verb driving. Car experiences the verb of driving. Thus, it is in the accusative case.)

(She is talking whom? This question has no answer.

But for the question, She is talking to whom? The answer is John. So here noun John is the object of the preposition to and not of verb talking. Thus it is in Accusative case)

(here the subject will tell the plan to Richard. So, the verb tell is first experienced by plan and then by Richard. Thus, the plan is a direct object and Richard is an indirect object.)

For words that already have letter s at their end, to make their possessive case we add only apostrophe without ‘s’.

5.VOCATIVE CASE or NOMINATIVE OF ADDRESS:

When a noun is addressed or called out in a sentence than that noun is said to be in the vocative case. This usually happens when you take the name of the listener while talking. Vocative case sets the identity of the spoken party or listener. 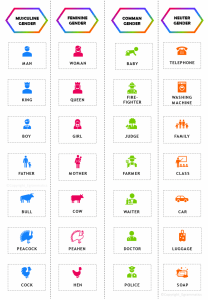 NOUN : GENDER Gender is another way of classification of...